Karhi is a Pakistani vegetarian dish consisting of a sour yoghurt & chickpea flour/besan base with pakora’s /gram flour fritters.

The Pakora wali Karhi is a vegetarian dish comprising of pakora’s (gram flour fritters) in a sour yoghurt with besan/chickpea flour base. The distinctive tangy taste is what makes it so delicious. In fact, it’s a great way to use up leftover ‘khatta’ sour yoghurt. It’s a dish usually made in the summers here in Pakistan because one of the primary ingredients is yoghurt considered to have a cooling effect on the body. 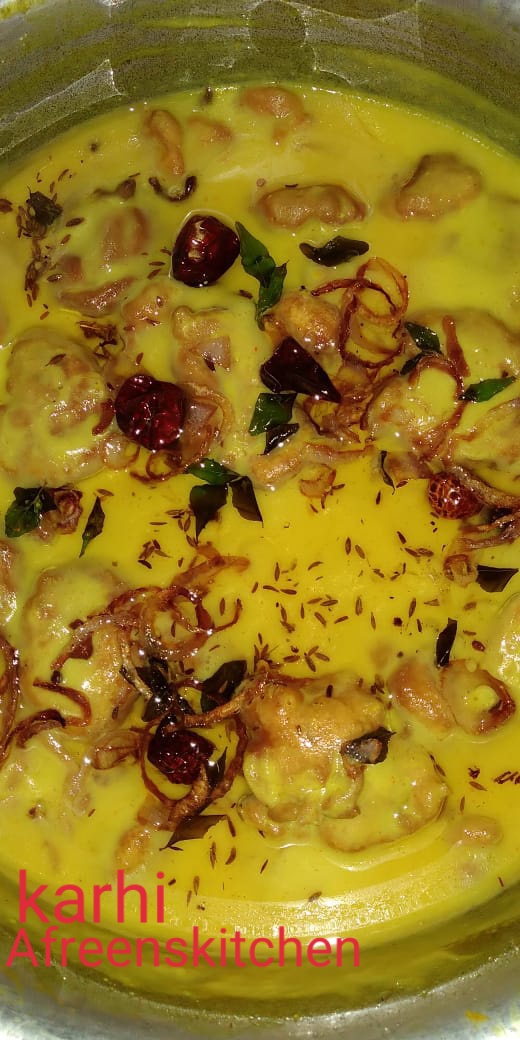 In large pot sift gram flour. Now ADD yougurt and mix it well with hand whisk.ADD red chili,turmeric,salt,lemon juice and garlic Cloves ,,Then add water about 12 -15 glass ..Bring it to boil first,,keep an eye because it could overflow from the pot. Then cook it for 2hours ON LOW flame till it reaches the desired consistency.

For Pakora’s::
Take a plastic bowl and add sifted chickpea flour/besan. Add water to make a medium thick paste. Add spices, baking soda then mix. Set aside for thirty minutes.
Heat oil in karhai or wok or frying pan. Using a spoon make little balls/dumplings of the besan/chickpea flour mixture and fry on low-medium heat till golden brown. Take them out
add to the karhi mixture that had been set aside earlier. Make sure that karhi mixture is hot.

For Baghar/Tempering::
Heat oil in a mini karhai or a small frying pan for baghar/tempering. Add sliced onions and fry till light brown. Then add white Cumin (Sufaid Zeera) till it splutters. Add whole red chili’s (sabit lal mirch) and green chili and saute for 30 – 45 seconds. Add curry leaves in the end, saute for 20 seconds and then pour over the karhi.
Serve hot with tandoori roti or rice.